(i want to get the front bumper pin stripe done at some point too, but need to find some)

I know im setting myself up for a beating on here, but whats everyones thoughts on this now - im really pleased how its turned out!

Agree about the roundels - I added them when I brought it, as from behind there was no evidence (apart from the spoiler) of it being a alpina until today putting the black badge on.
I would change them back to the originals but they are so faded (theyâ€™re 10years old lol) may just buy a new set to put on!

it's a no from me I'm afraid, don't like the roundels and I don't think the stripes suit the car (or is it because they look like they're too high up the side of the car). But thats purely my opinion.

Although looking at others online the stripes would appear to be set where they should be? But I'm not totally sold on the look.
Former BMW CC 7 register chairman

Ok - Iâ€™ve put the original roundels back on, an it doesnâ€™t suit due to the fact that itâ€™s a silver car with black detailing on the front, and now rear, so I know this is going to irritate you guys even more... Iâ€™ve ordered the black and white roundels (to match the engine and the car itself... arrive early next week)
I know itâ€™s not keeping to the original alpina style, but Iâ€™m matching to what I have available!
Top

You can go back to silver decal and rear badge ?
Top

I like the Alpina ronudels but am not to sure about the black pinstriping and badging on silver. But it's your car so have it as you want it. The only time i would ask for advice is if you were looking for total originality.

I'm nonplussed about the roundels but something isn't right about those side stripes. From an earlier comment I guess they are not OEM size? They look too heavy. Alpina is all about subtlety. If I had a silver car I'd go for the graphite stripes. Just my honest opinion 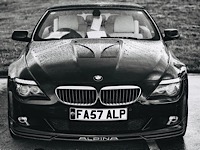 Iâ€™ve seen these kits on eBay, I always thought the pinstripes were too thick and how the sections are finished either side of the front wheel arch looked awkward to my eyes.
Go OEM or donâ€™t bother when it comes to Deko kits (unlikes Simon starts supplying again of course).
Subaru Outback 3.0
E64 B6s #100 Cabriolet 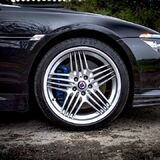 Now that rear Alpina badge looks familiar! Sorry again mate that the D3 badge got bought by a chap from the US.

For record keeping sake, hereâ€™s a picture of where your badge came from!!

Fitted them ok spanny as where they shud be?
Top

All good hap, bmw fitted them in the end after a bit of a mishap from
My body shops side, so all correct as far as I can tell?
D3 F30 No. 84
Top

You asked for feedback, so here goes but please don't shoot the messenger ....

Black on silver is a strong look and not necessarily to everyone's taste. Graphite is a more subtle look but each to their own.

The stripes look the right size but I think they are mounted just a bit too high. I believe the top stripe should sit just below to door handle recess and certainly not running within the recess (as it appears in the photo once zoomed in).

As for boot and bonnet roundels - the car came with blue and white BMW ones and any others are fake. However, it's your car and black stripes are not OEM either, so make your own choices. The point is, non-OEM is likely to antagonise quite a few here so I'd go looking for my hard hat, if I were you.

And finally, on close inspection, the "L" and the "P" of the boot badge look wonky. It could be a trick of the light but they don't look straight and aligned with the other letters.
Charles
Teacher of Chemistry and driver of ALPINAs - not necessarily in that order

Thank you all for the feedback - i knew it would'nt be to everyone's taste!

When i brought it a few months back it was de-badged (apart from the enkahnz badge) http://www.enkahnz.co.uk/ ive tried to contact them to find out what work they have done but to no avail... i thought getting hold of the original Alpina D3 lettering would be easy, turns out it wasnt (but thanks to Spanny ive now got at least half of it lol)

As for the lettering being un-level, it came with the template