After that adventure of the trip to Wales it was time to start with some cosmetic tidying. Given the rain I'd experienced while away it wasn't too bad 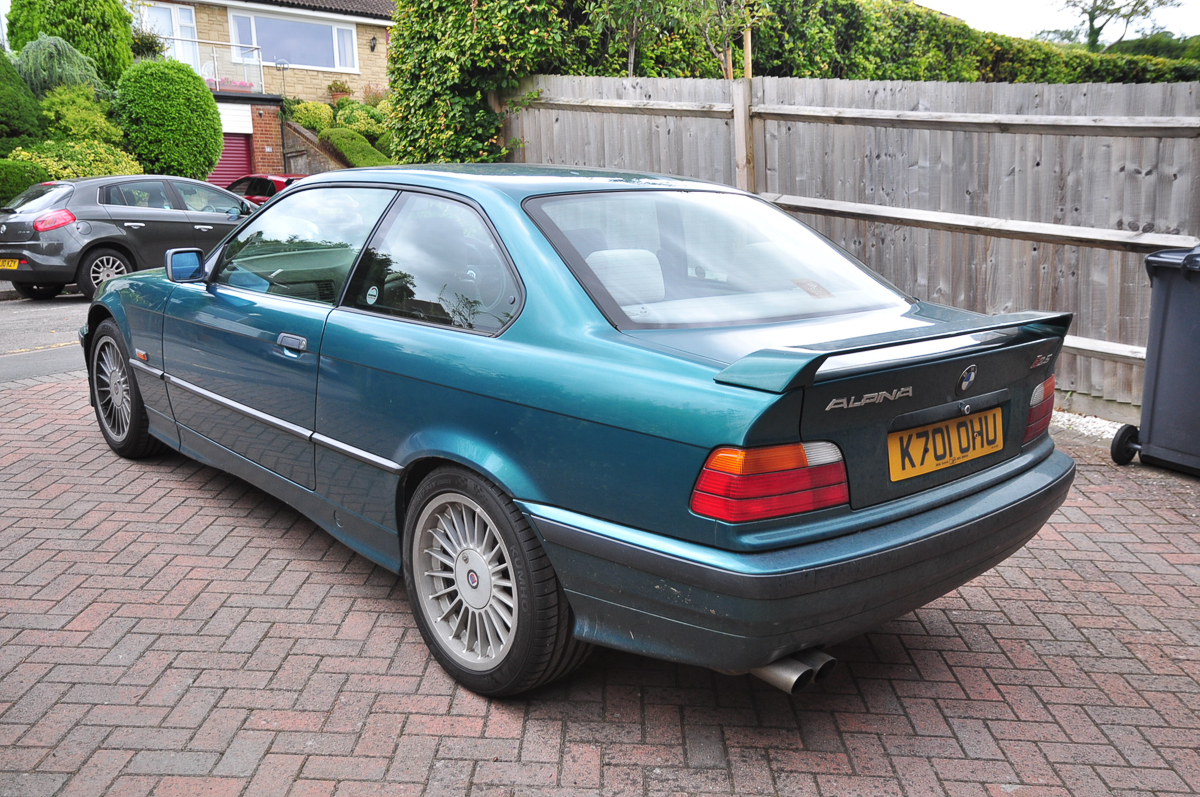 As always I doused it in snow foam. 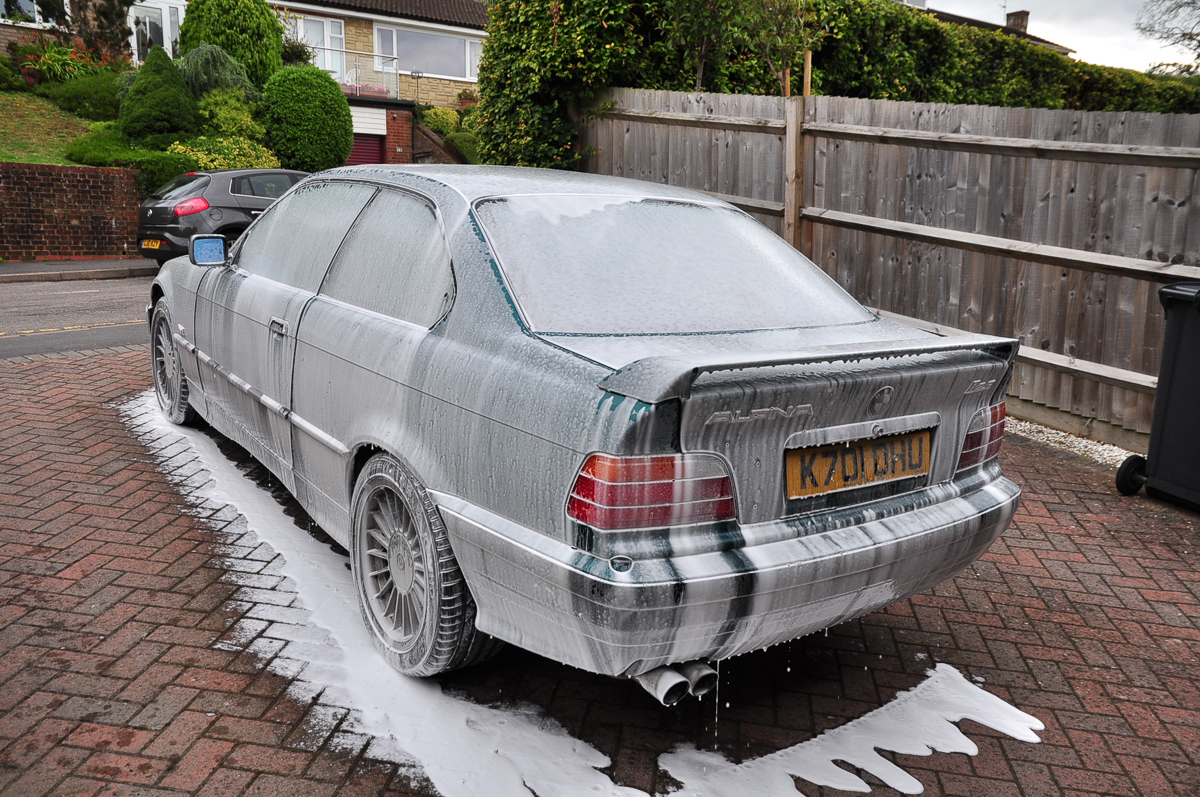 I also went round it to deal with the tar on all the lower panels. This one is the worst: 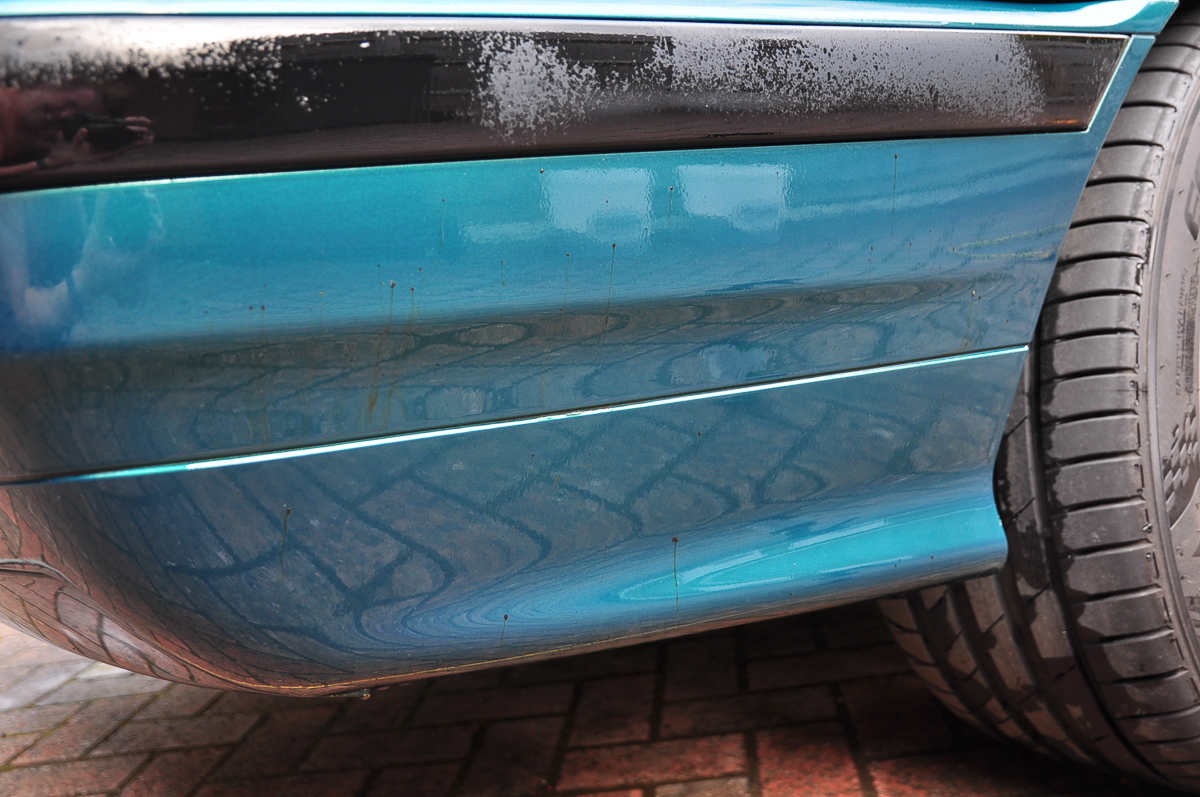 A few hours later and it's looking like this 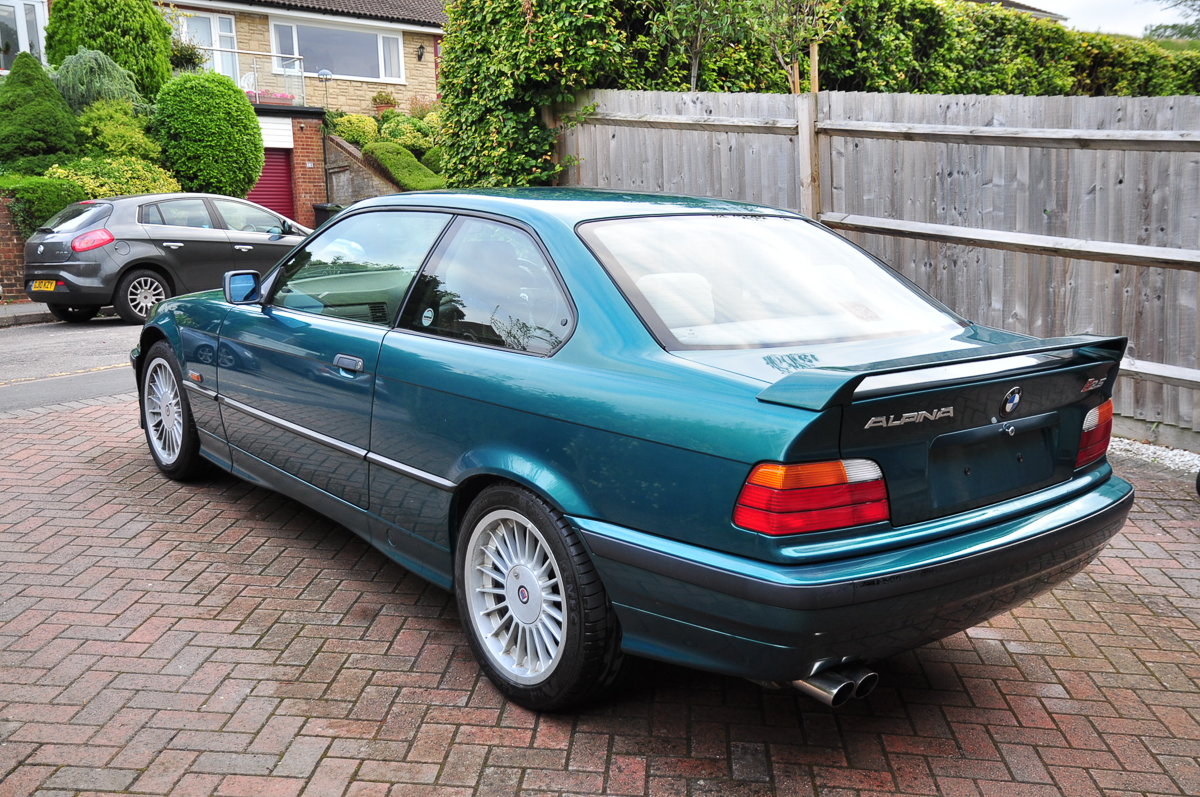 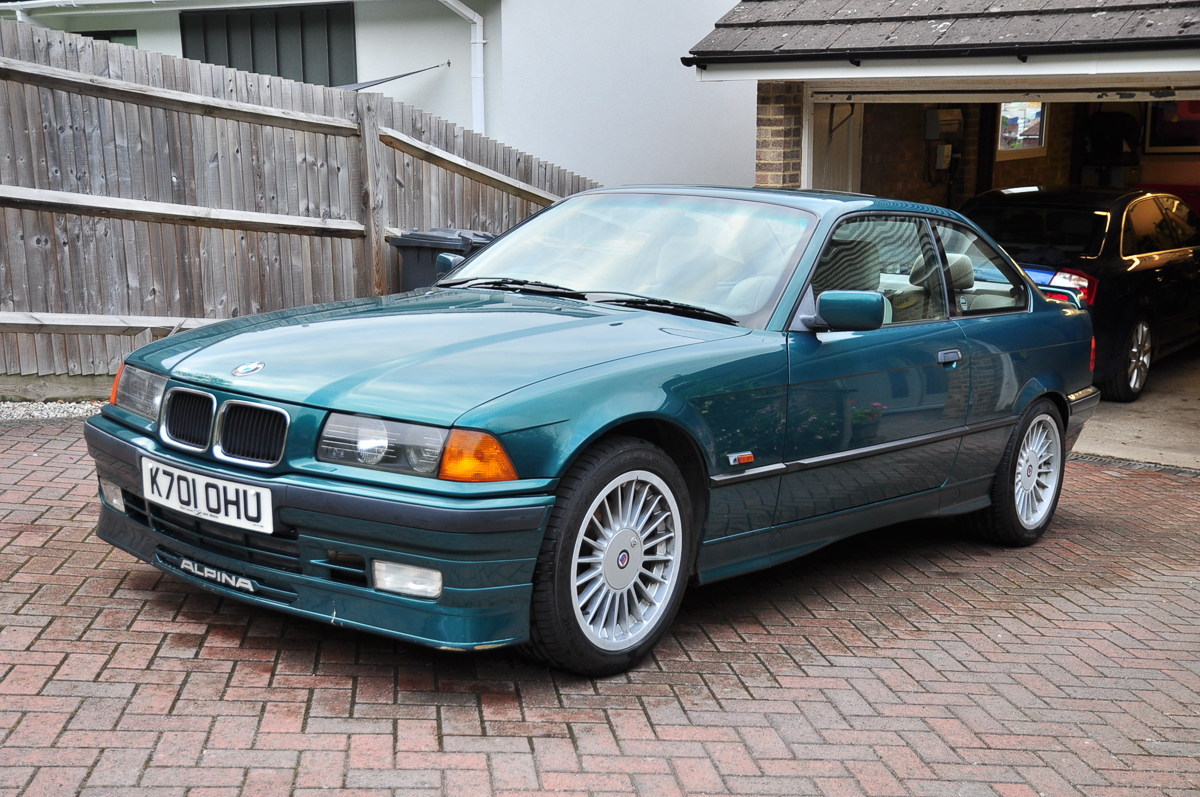 I then put it in the garage ready for me to start detailing the paint. I tend to do for an hour or two each evening so it takes a while but stops it from being too boring.

A week in to the process I thought I'd wheel it out to see how I was getting on, this being the driver's side and bonnet done: 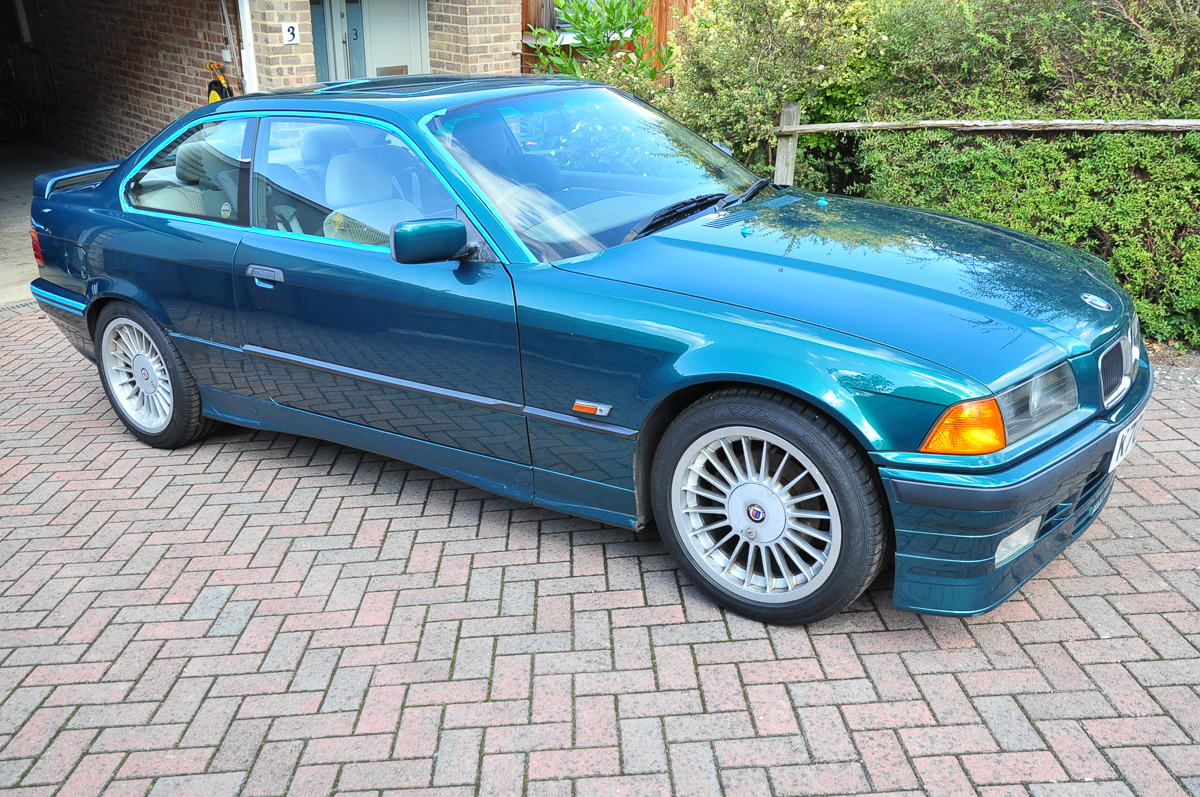 While it was out I also took the chance to replace the current battery which was undersized and so it couldn't be secured using the existing BMW clamp. Similarly my previous Alpina had an undersized battery too, which is odd as I can't imagine either uses anything other than a very common size. 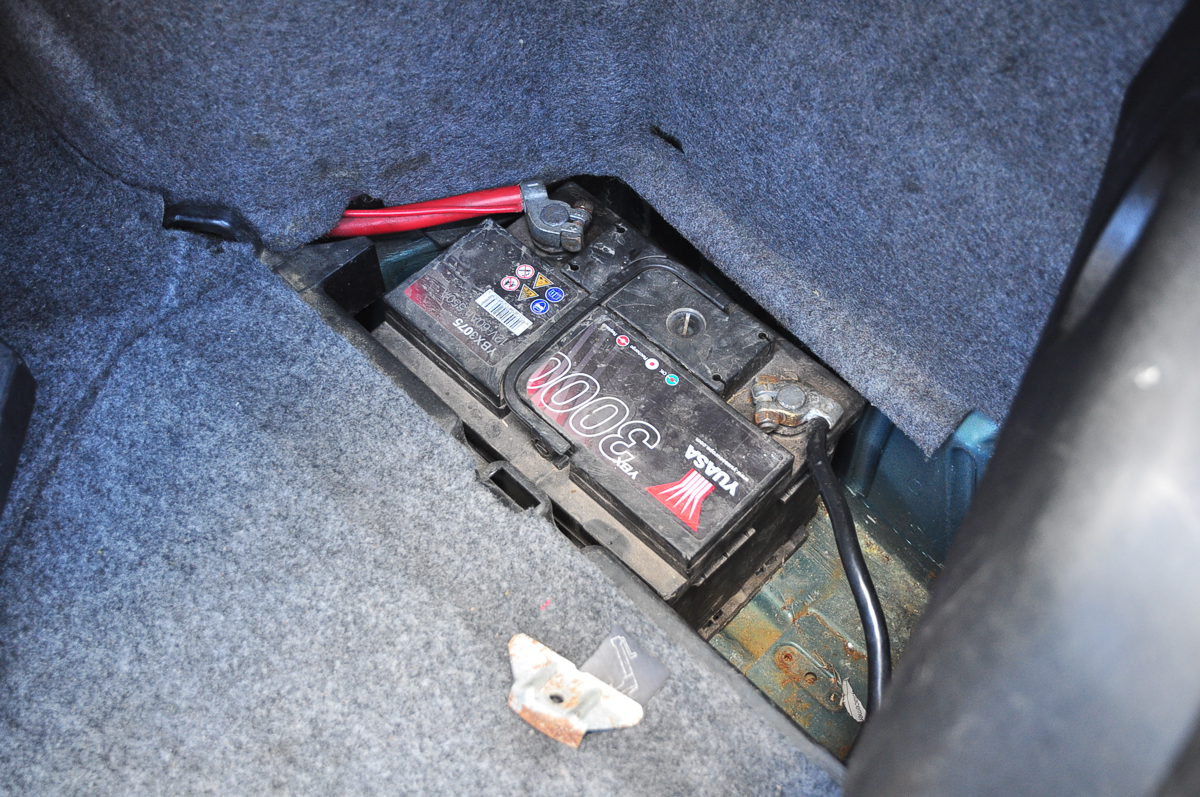 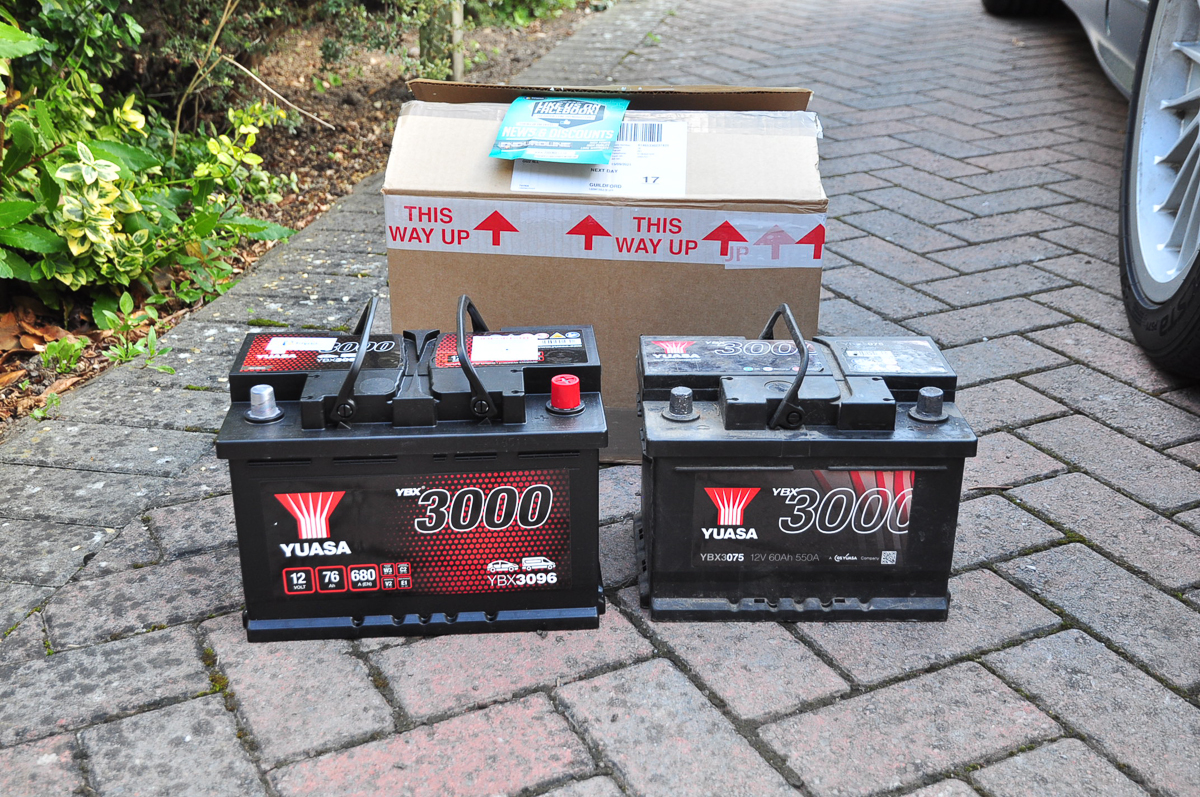 The new battery fits perfectly and, as you can see, is now held down properly which feels much better. 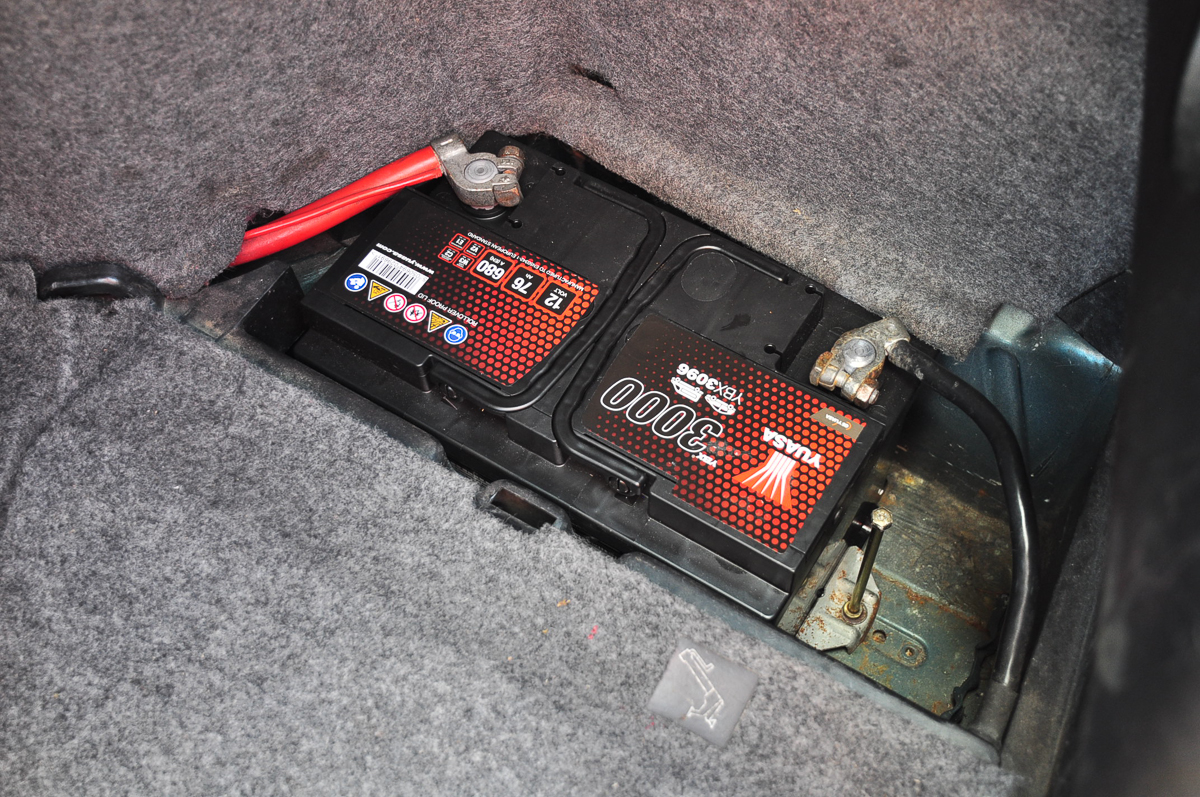 I also fitted some new wipers, which were a bargain £11 in that week's EuroCarParts sale 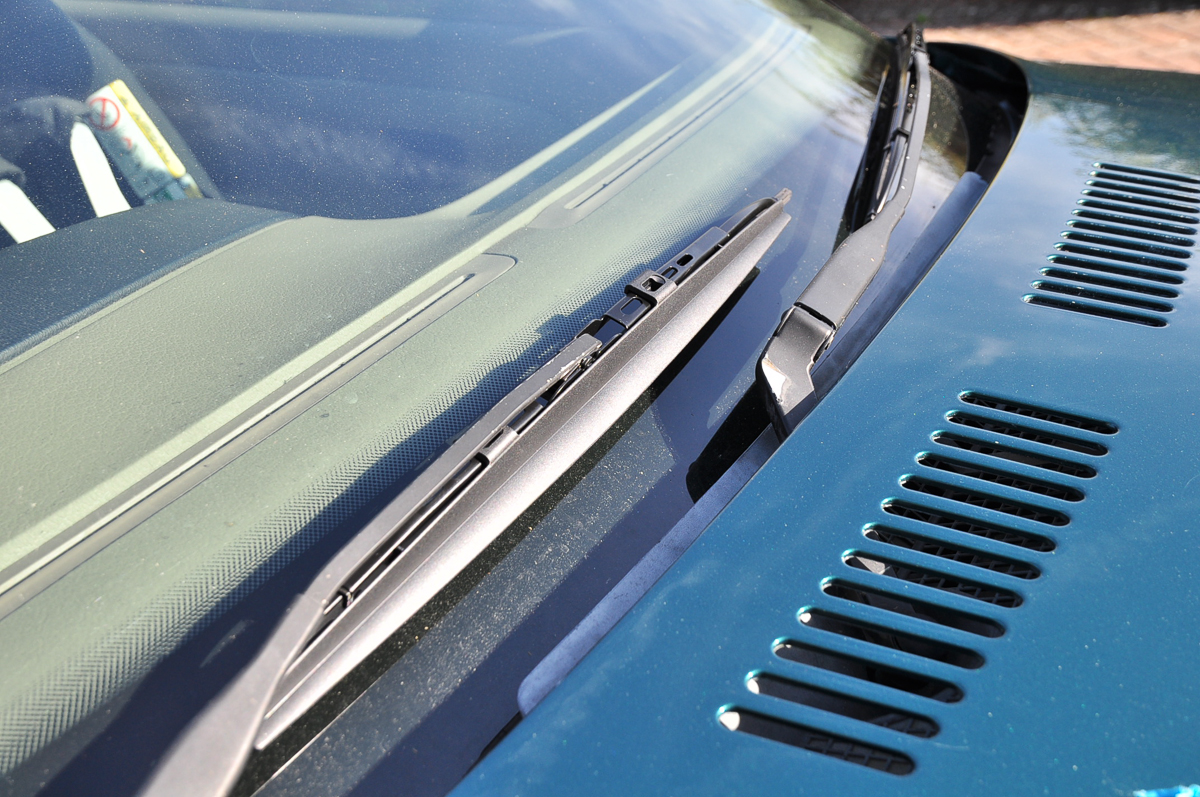 Finally, I fitted a Comfort Connector for my CTEK charger, which will make life a little easier when it isn't being used. 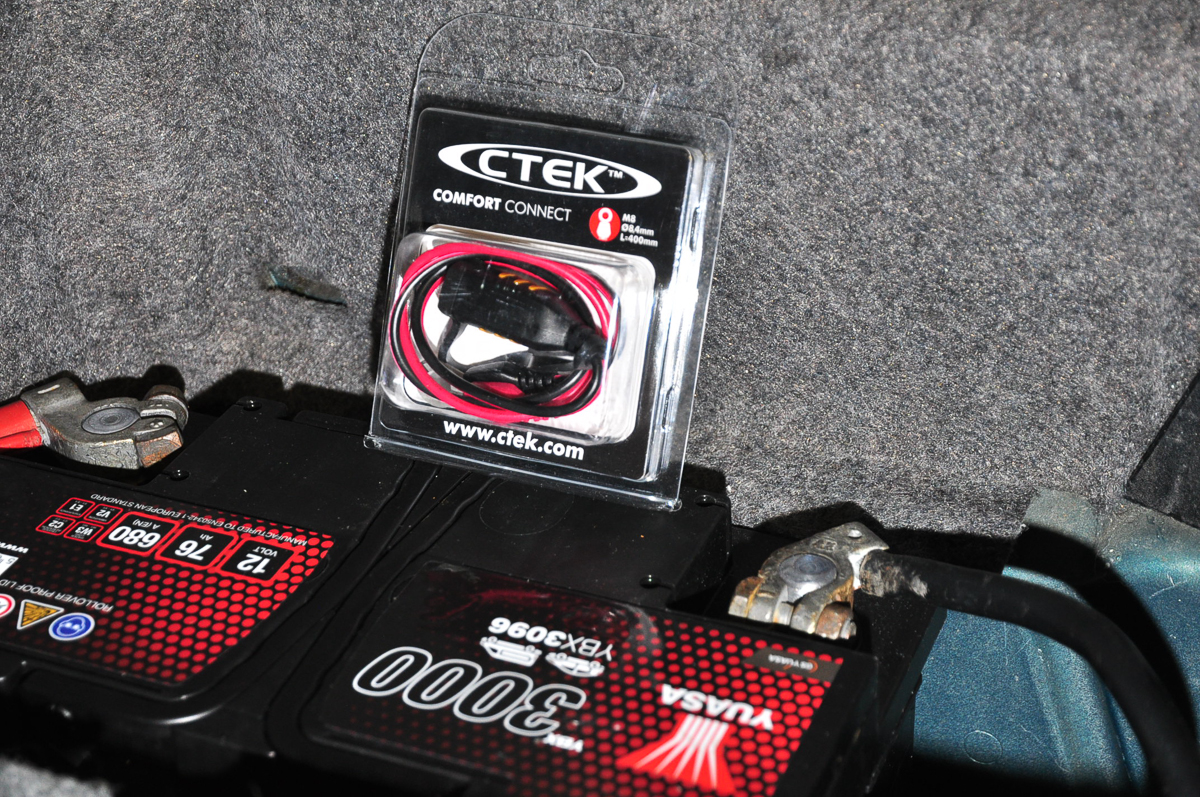 James - only just found this; my new favourite thread

Glad you're getting on well with the car and making great progress! Well done for getting those wheel arch liners out - what a terrible design eh?

Your excellent thread reminds me that I need to start one afresh for my further adventures with number 77.
2000 Alpina B10 3.3 Touring 26 - Sold 2008 and scrapped

Thanks Rich and good to see progress on your E36. I'm nearly done on the paint restoration too so barring any other issues, I'll be heading to Goodwood in it this weekend for the Member's Meeting.
Currently:
1992 Alpina B2.5 #026, Lagoon Green with Parchment Cloth

Finally, the polishing is done. It has taken weeks but then, as mentioned, I've only been doing an hour or two each evening and there was lots to get to.

In the end, despite having done a decent tar removal during the wash stage I had to go over it again, as there was still lots of little particles left.

Not so many pictures, but I had forgotten about this one, which was taken during the 3 day period between buying the Mini and selling the Fiat, during which time I owned 4 cars! 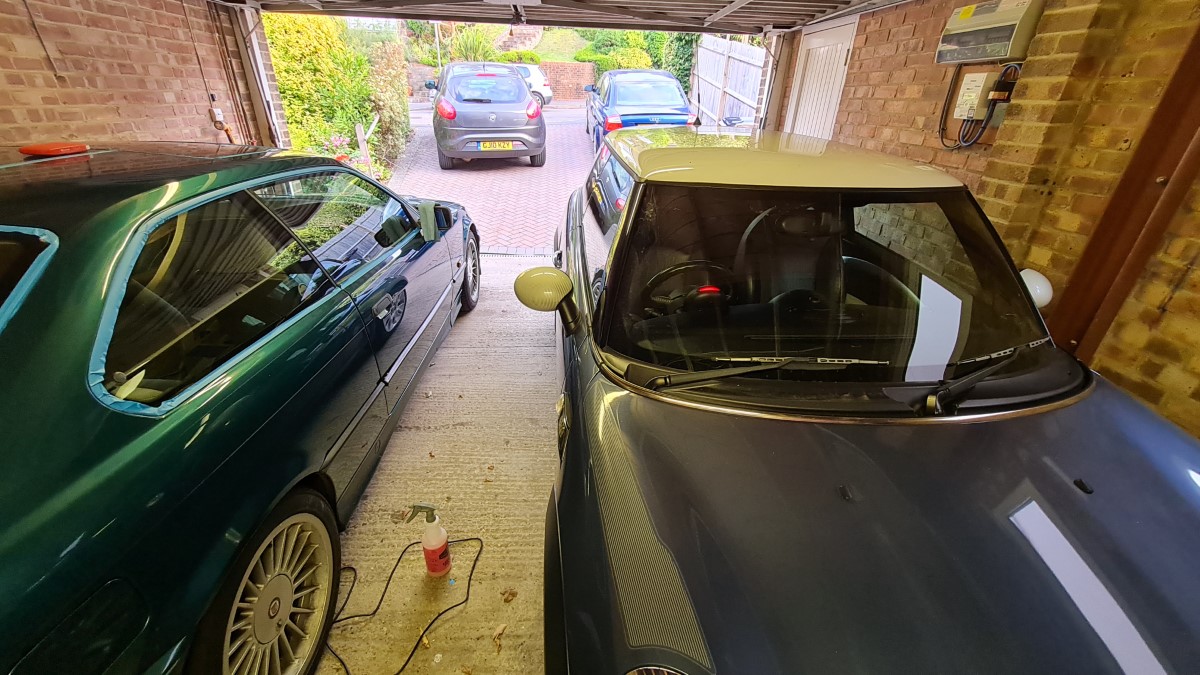 While I was doing the rotary work I also took the fan and clutch assembly off to determine what I had. It's seen better days for sure and more curiously this particular fan clutch isn't even for an E36 and is listed under the E28 instead. Odd. 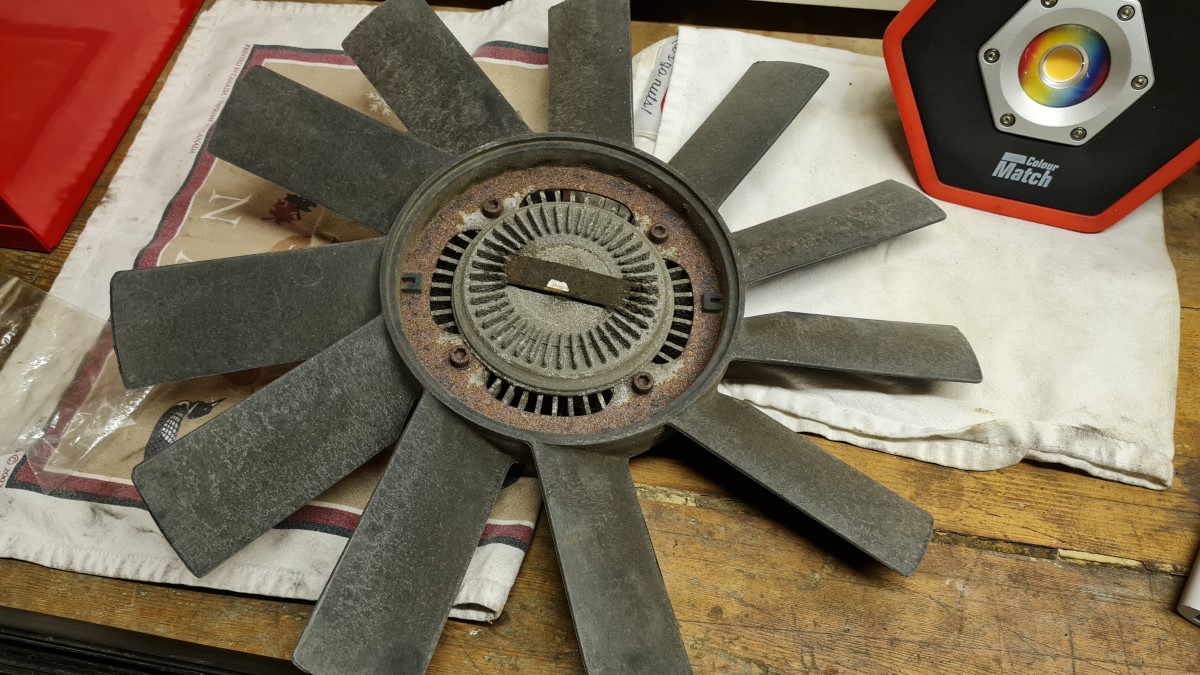 Most of the car was done with Sonax Perfect Finish, but for the front bumper and spoiler I used a no name pad and some Lime Prime as things aren't in such good shape down there. 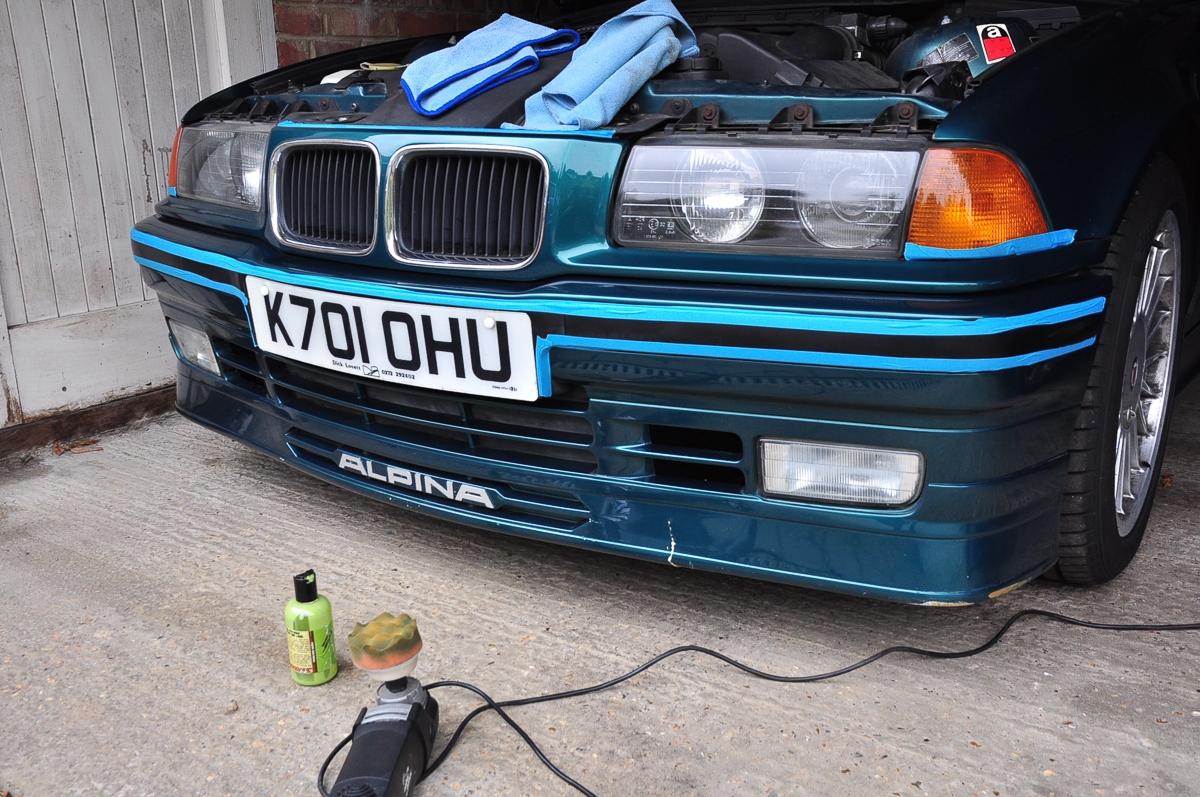 All of which gave me this (wheels still not done!) 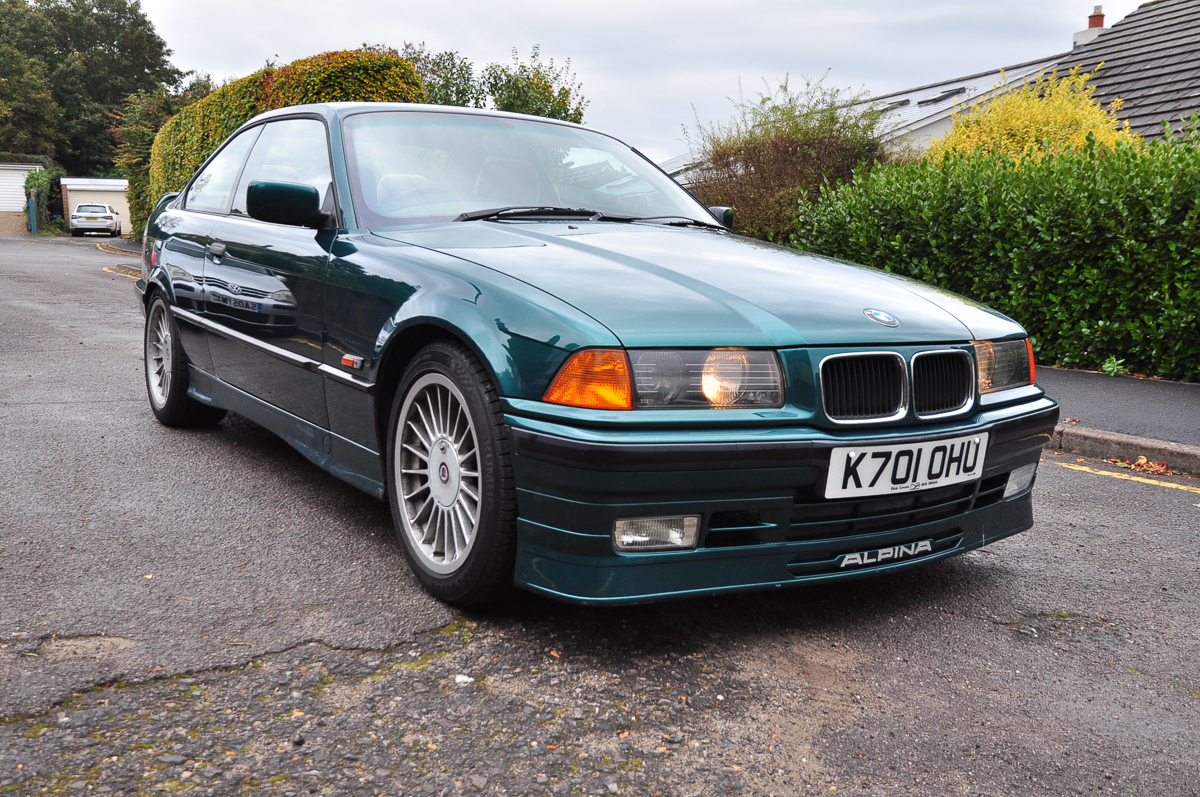 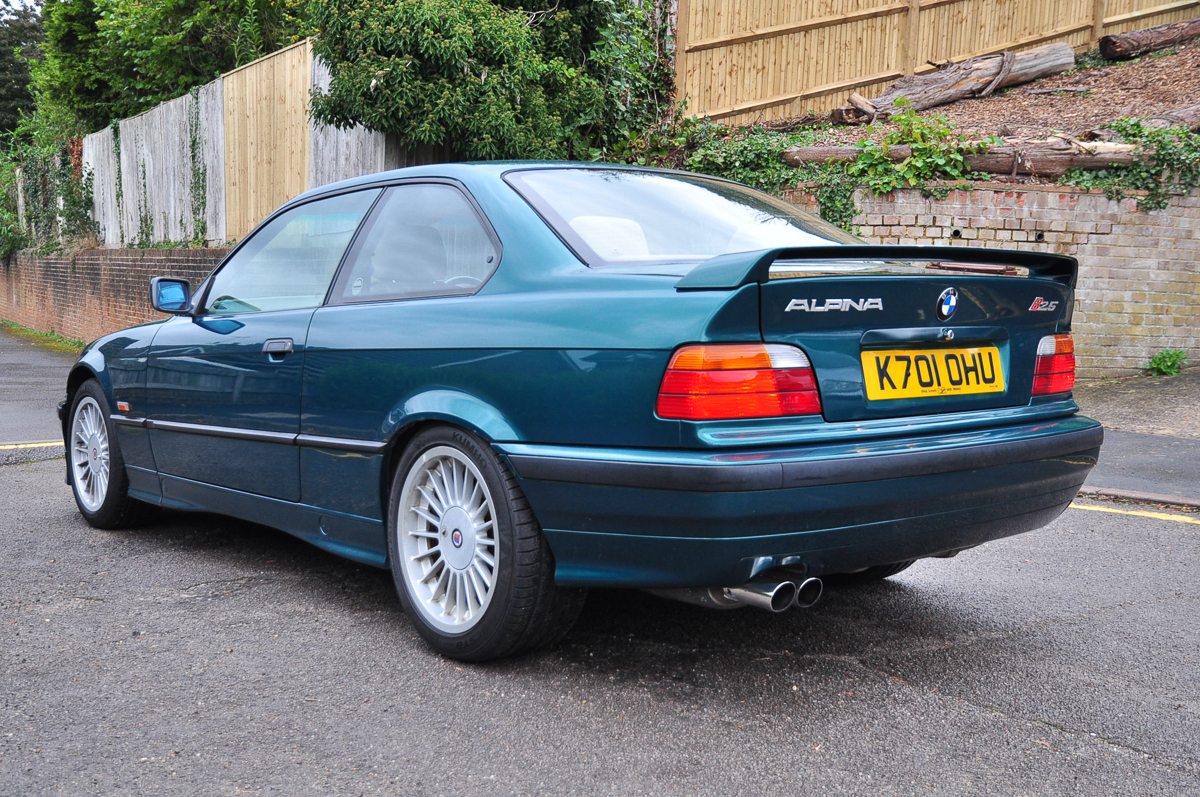 These shots were taken early in the morning as I was getting ready to leave for the Member's Meeting at Goodwood. Had a great day, but on the drive down the clutch pedal went to the floor and wouldn't return. I managed to bring it back with my foot, but clearly something isn't right. I also nearly lost a wiper blade but that was fitting error by me I think.

The rest of the day was spent watching fabulous stuff like this and inevitably I will now spend the week looking at old cars on eBay trying to justify buying one and plotting a "70s touring car" homage. 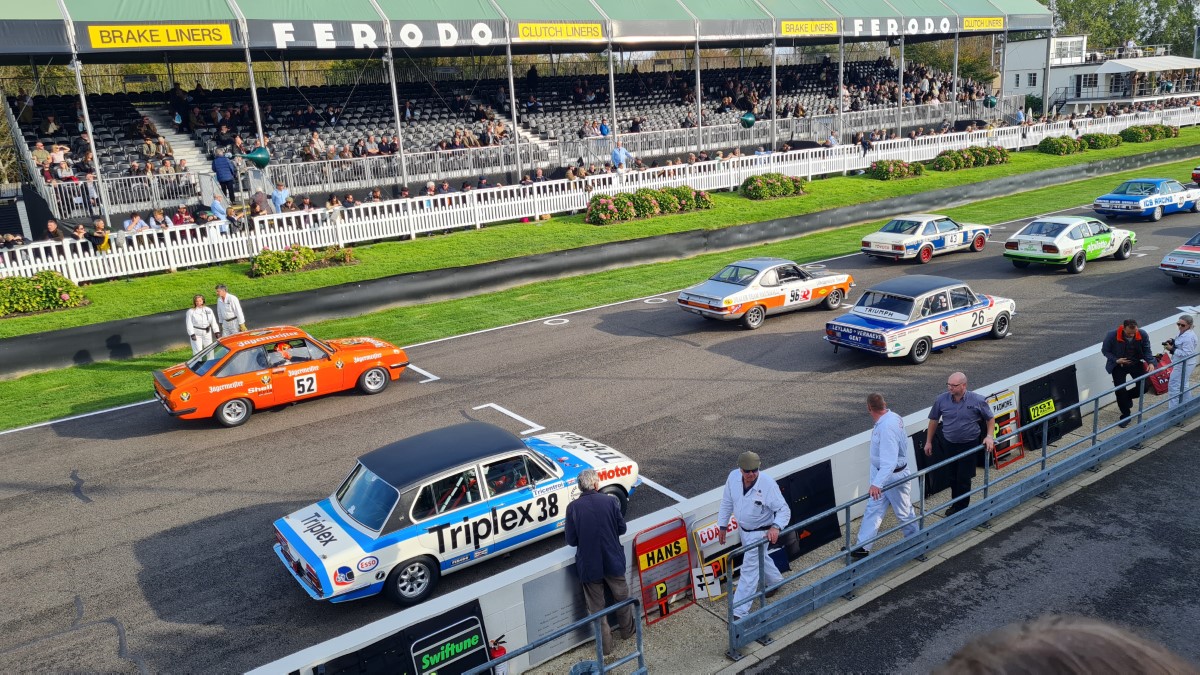 Looking great there James, well worth the efforts.

It looks like the boot lettering is a bit too high. I got the official measurements from Buchloe, if you're interested, as the ones on the back of #062 are wrong and will need correcting when I'm brave enough to remove 'em!

Thanks Bob, and also for the badge position information. I'll check tonight to see how far out of spec it is. It doesn't surprise me that it's wrong though, as the boot as definitely seem some paintwork in the past.
Currently:
1992 Alpina B2.5 #026, Lagoon Green with Parchment Cloth

Looks amazing James - well worth all of the effort. This is such a great car.....
Paul

Some more progress on the B2.5, with the interior this time.

Headunit Downgrade
In a previous thread I'd mentioned that I was planning on swapping out the headunit. I find the current one challenging to operate when driving, the buttons are small, and the display is constantly moving (and can't be turned off) which I find distracting. Here it is: 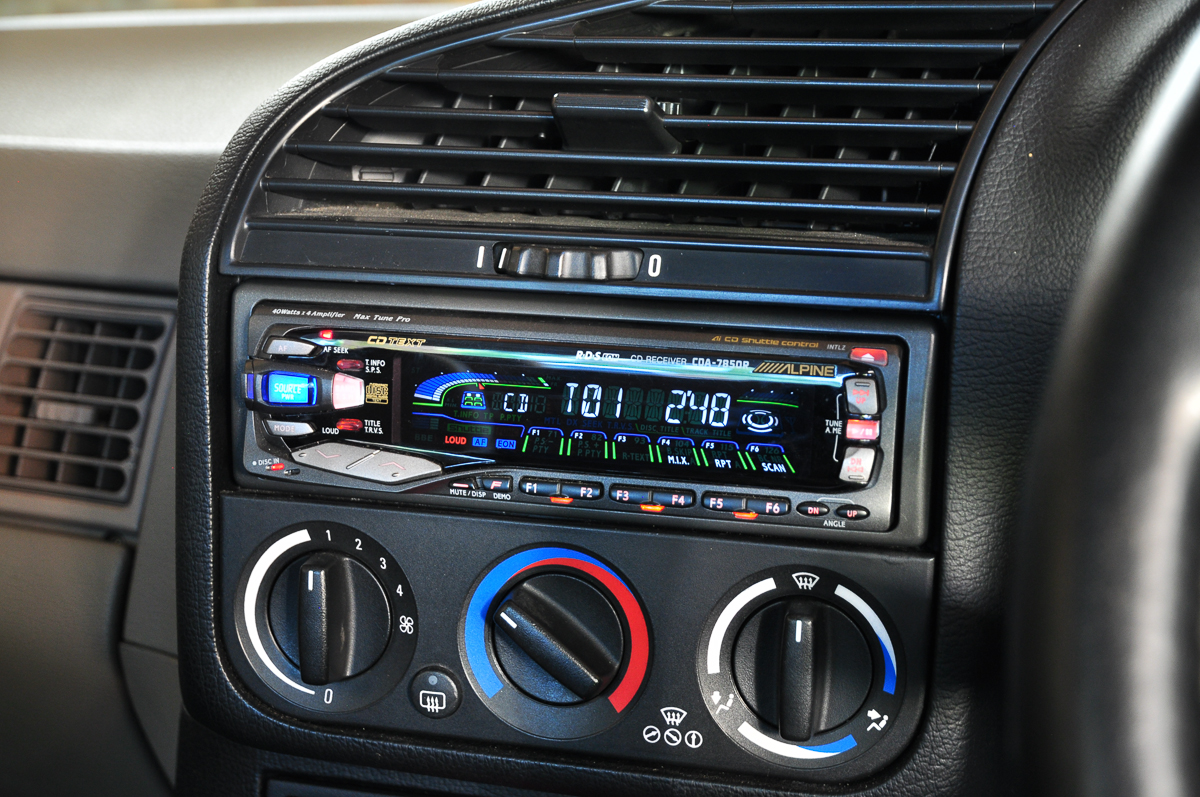 I started looking for a replacement unit, had a false start with a unit and then found one on eBay slightly over budget so I sent the seller an offer. He politely refused so I sent him a picture of the current unit installed in the car and got this message. 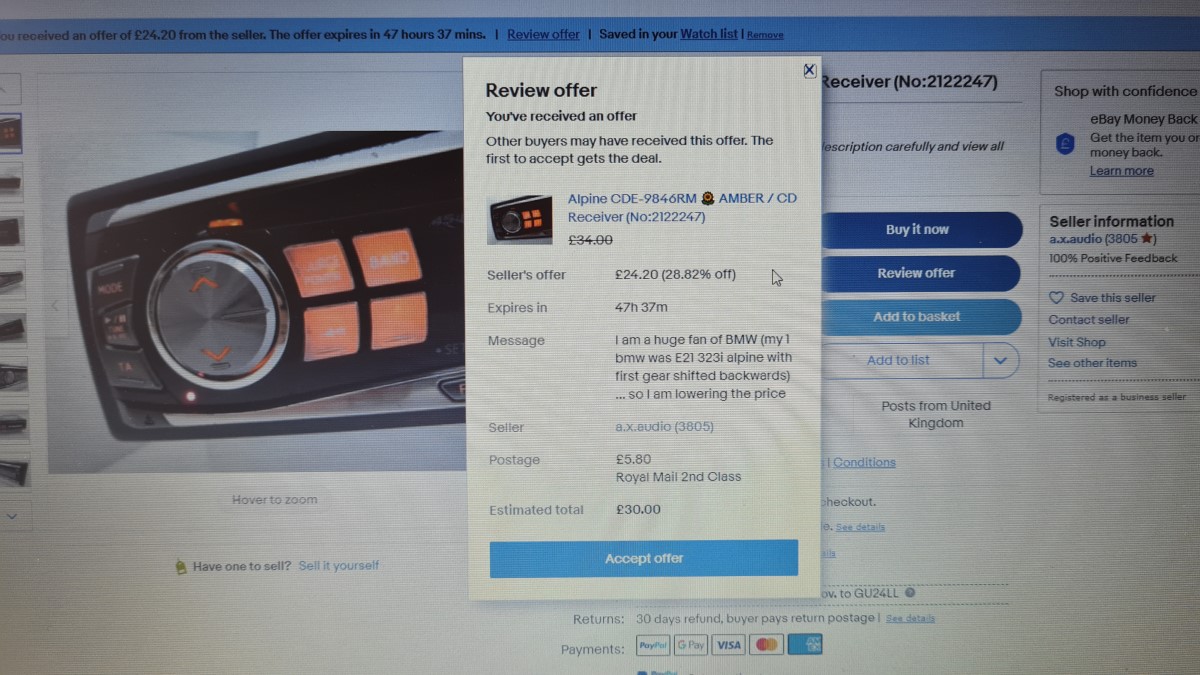 The new one crucially has amber rather than green illumination of most Alpine units, which better matches the orange dials.

Installation was made very easy because the mounting cage of the unit being removed is the same as this new one going in, so very quickly it was all done. Here it is powered up and working perfectly. 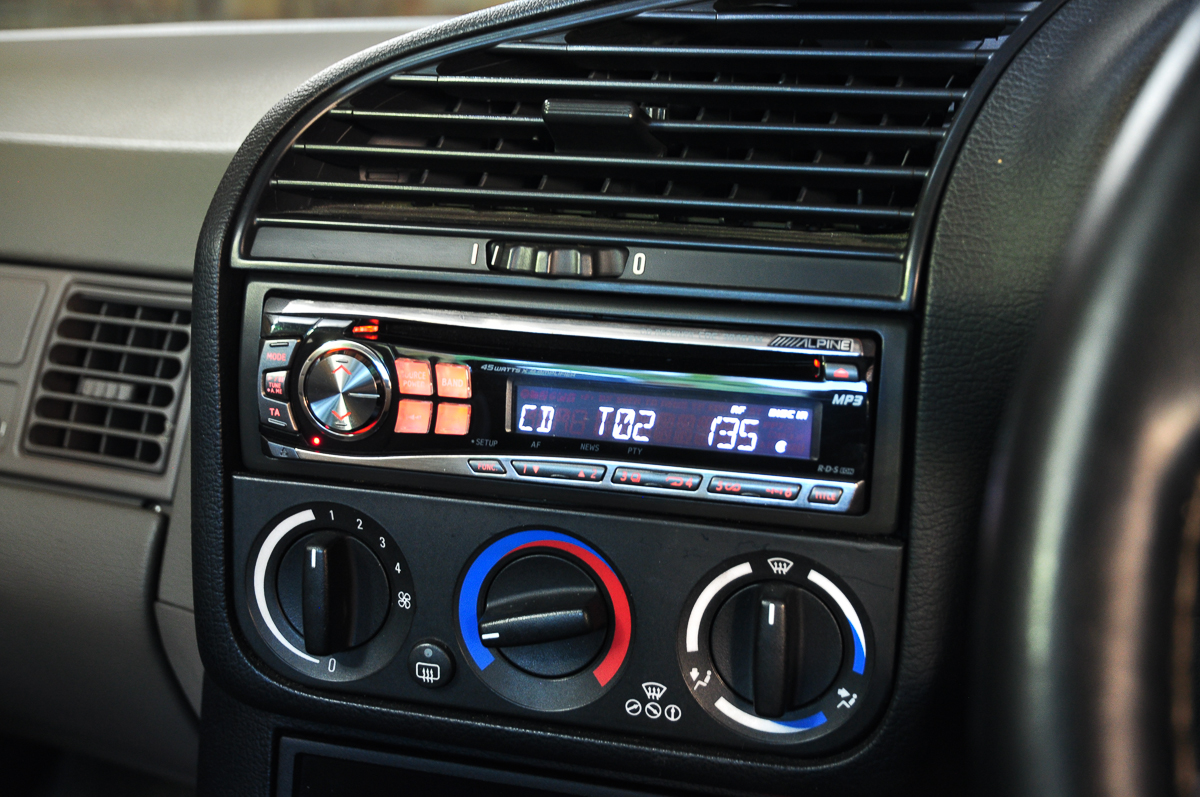 And here's how it looks in low light against the dials - I'm happy with that. 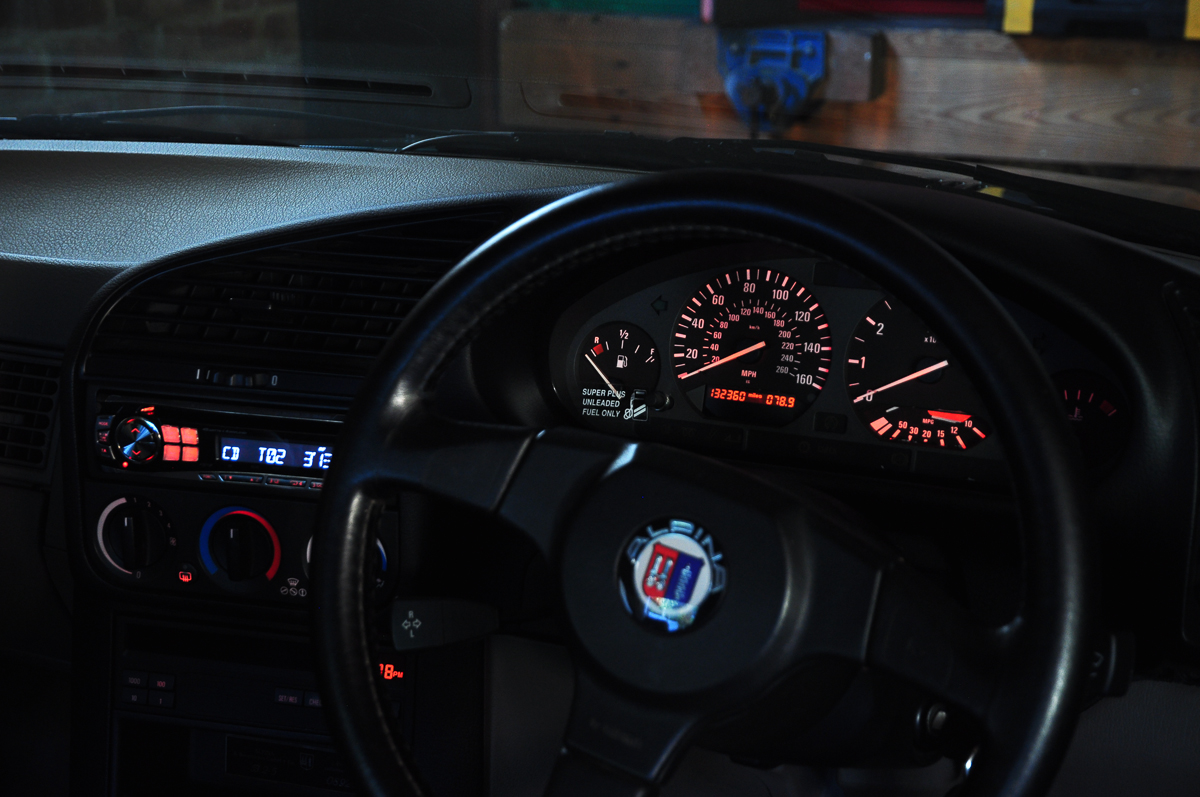 Fan Fix
When I got the car the fan wasn't working at all. I replaced the blower motor and that was progress but it was only operating on speed 4 (maximum) which is a tell tale sign that the fan resistor has gone.

The car came with a replacement resistor but as an early non aircon car it wasn't the right unit and turns out that this one is for the E39/E46 platform anyway. 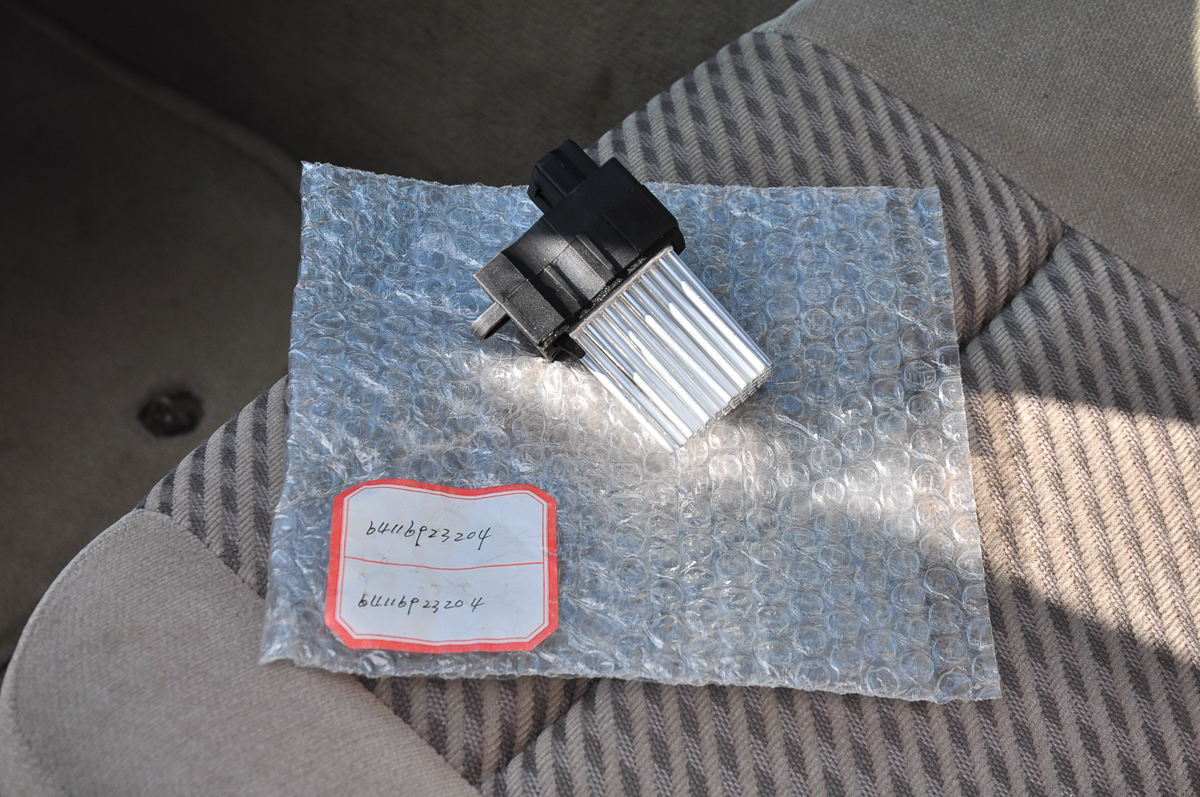 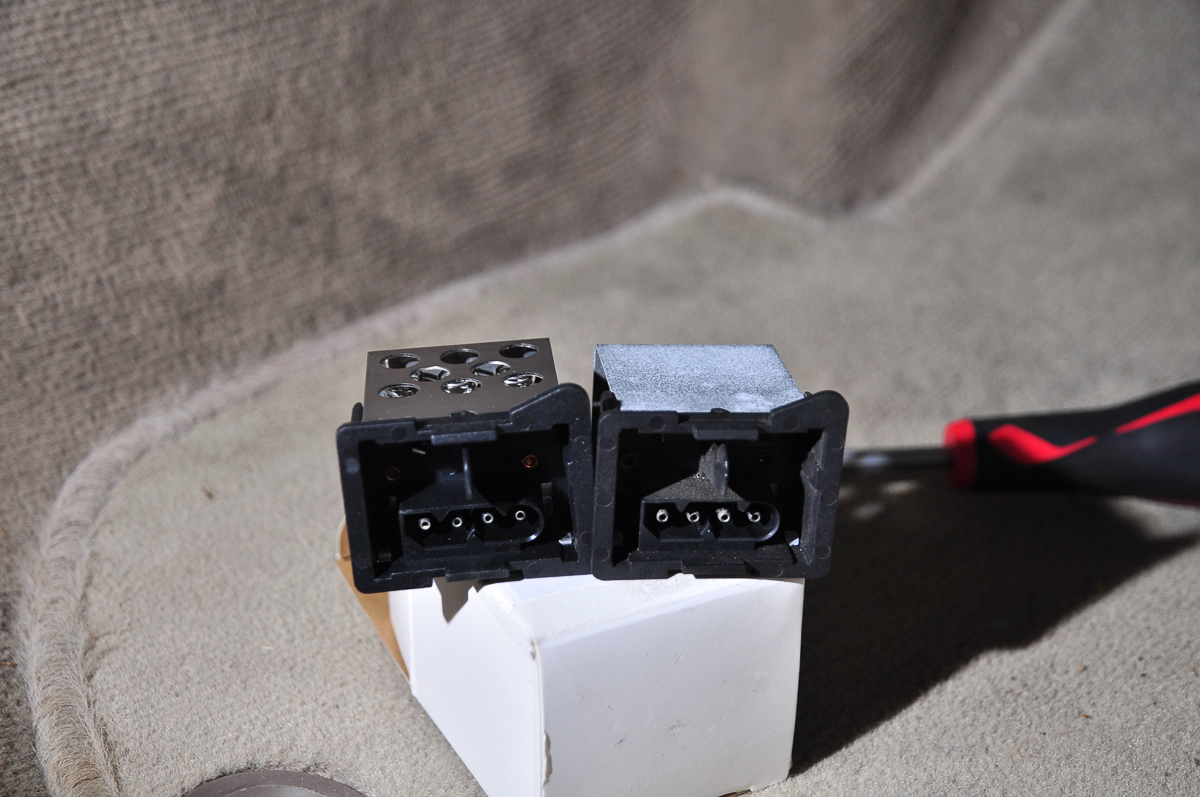 Replacement requires removal of the trim panel below the steering wheel but that was easy enough. 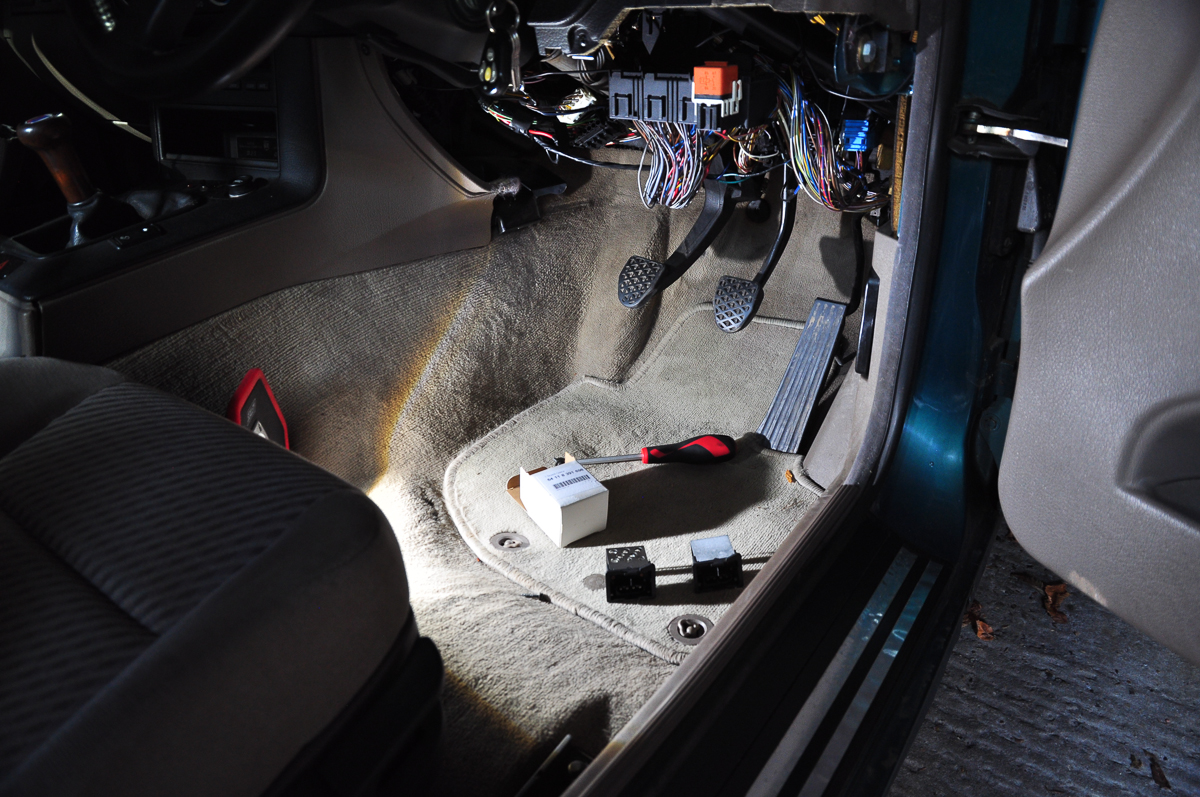 And it's tucked up on the left, but thankfully just held in with clips so no dramas. This is the new one installed. 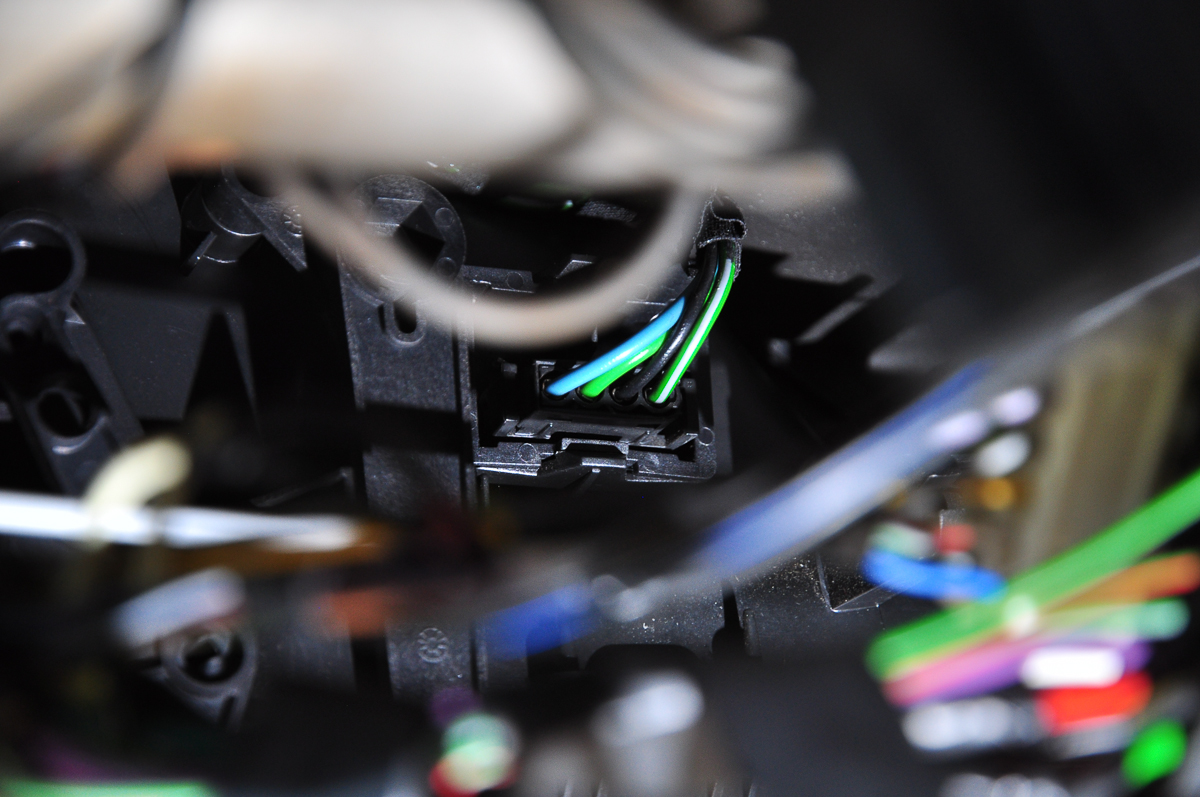 And then everything goes back together and, finally, I have a fan that works on all 4 speeds again. As I said in my YouTube video about it (https://youtu.be/ihTprTjBH6U), fan-tastic! 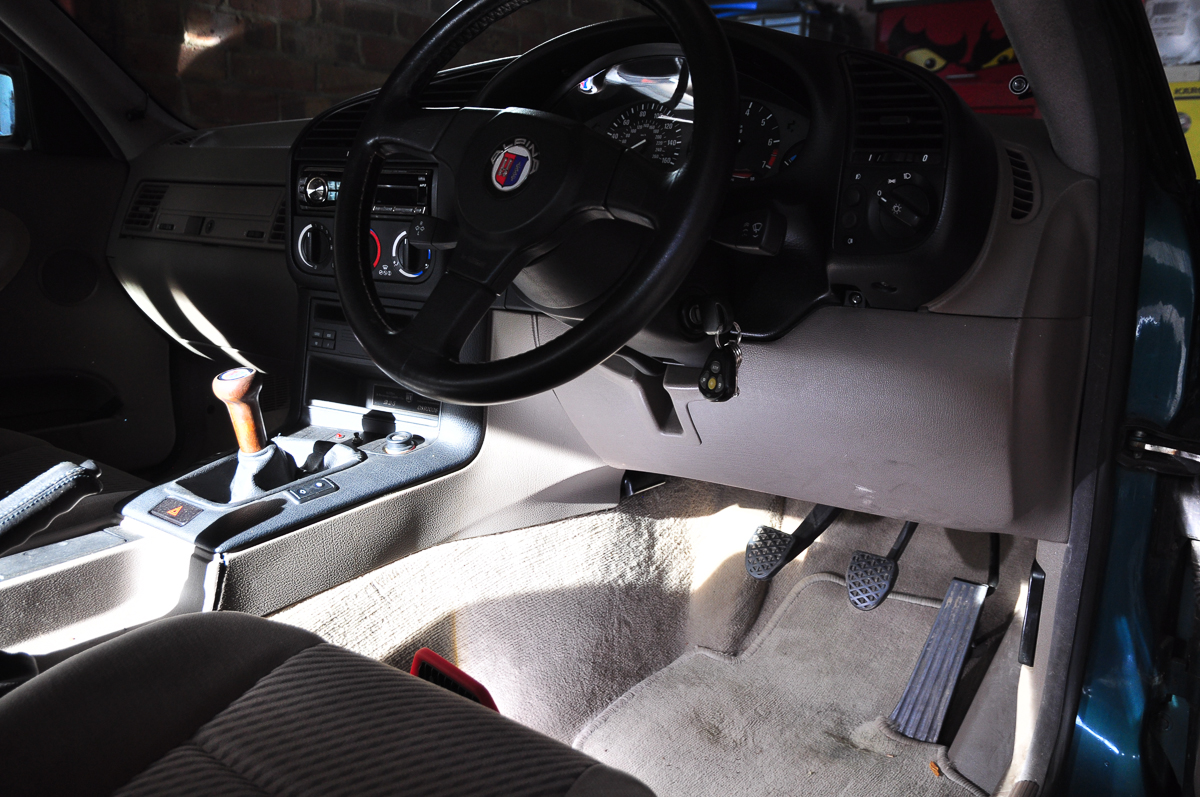 While all that's been going on a replacement slave cylinder has arrived so replacing that is next and then I can get it driving again.
Currently:
1992 Alpina B2.5 #026, Lagoon Green with Parchment Cloth

Great job mate! My fan has stopped too, but was working fine before the cover above and removable bulkhead in front of it were taken out to get the cylinder head out. I suspect that I've dislodged something so going to need to get around to whipping it all out again to have a look. Apparently the microfilter(s) are in there too so might do that concurrently.
2000 Alpina B10 3.3 Touring 26 - Sold 2008 and scrapped

richb10touring wrote: ↑
Fri Nov 05, 2021 11:39 pm
Great job mate! My fan has stopped too, but was working fine before the cover above and removable bulkhead in front of it were taken out to get the cylinder head out. I suspect that I've dislodged something so going to need to get around to whipping it all out again to have a look. Apparently the microfilter(s) are in there too so might do that concurrently.

Not sure if you've attempted this yet Rich, but it's not too terrible to get to, just a bit fidly. The motor is connected by three wires to a single removable connector, so I suspect it's that which is dislodged. As for the microfilters, they will only be with the fan if you don't have aircon, otherwise they'll be under the dash, glovebox side.

A useful reminder that I am still working on those badges. This is the guide that Bob sent through:

And here's what mine measures up as: 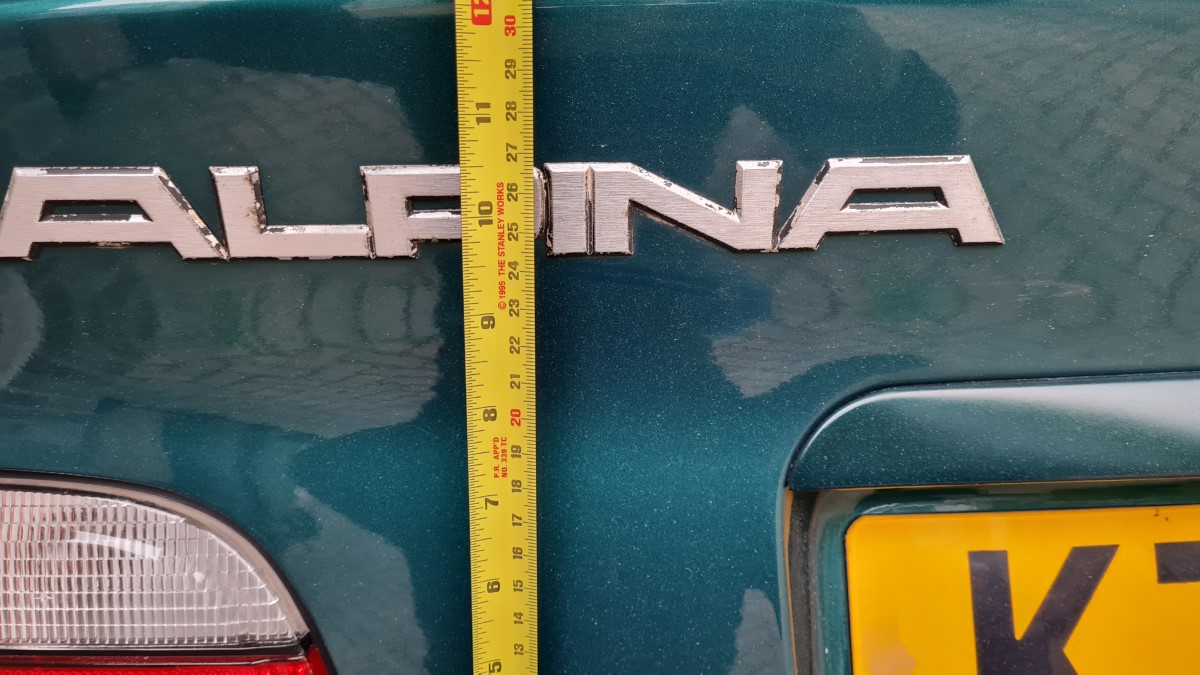 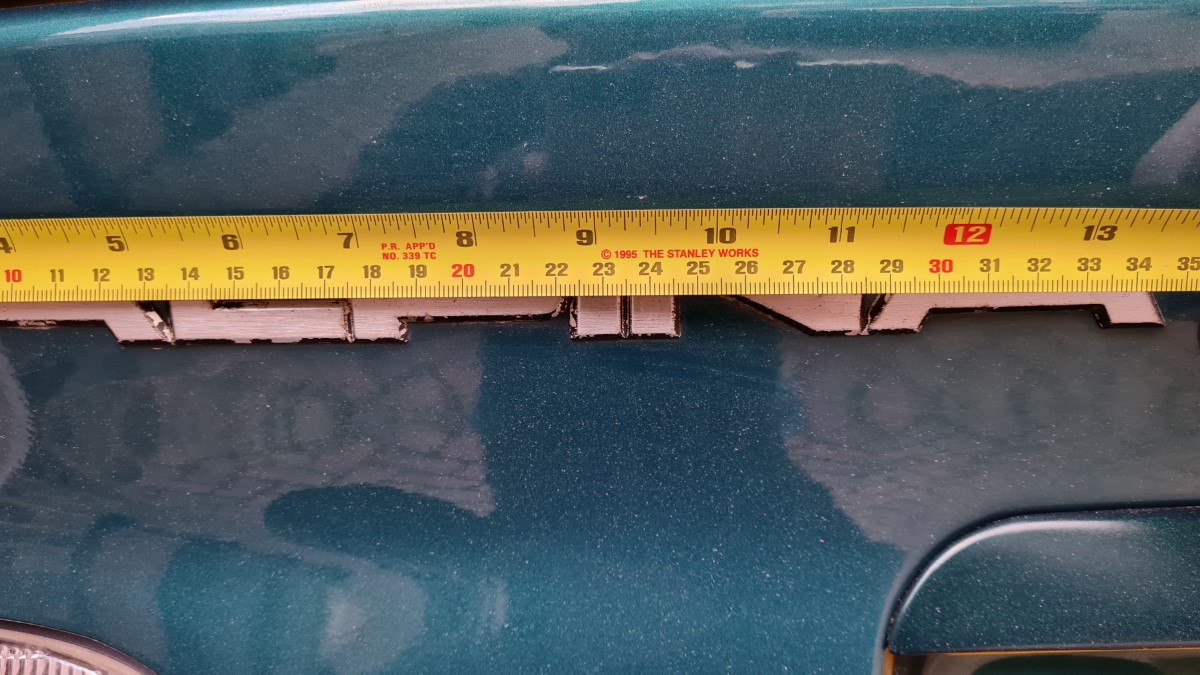 So accordingly it should be left a bit and down quite a lot. In fact the 210mm vertical measurement would put the badge only a few mm higher than the boot handle which doesn't feel quite right, but I'll mock it up to test. 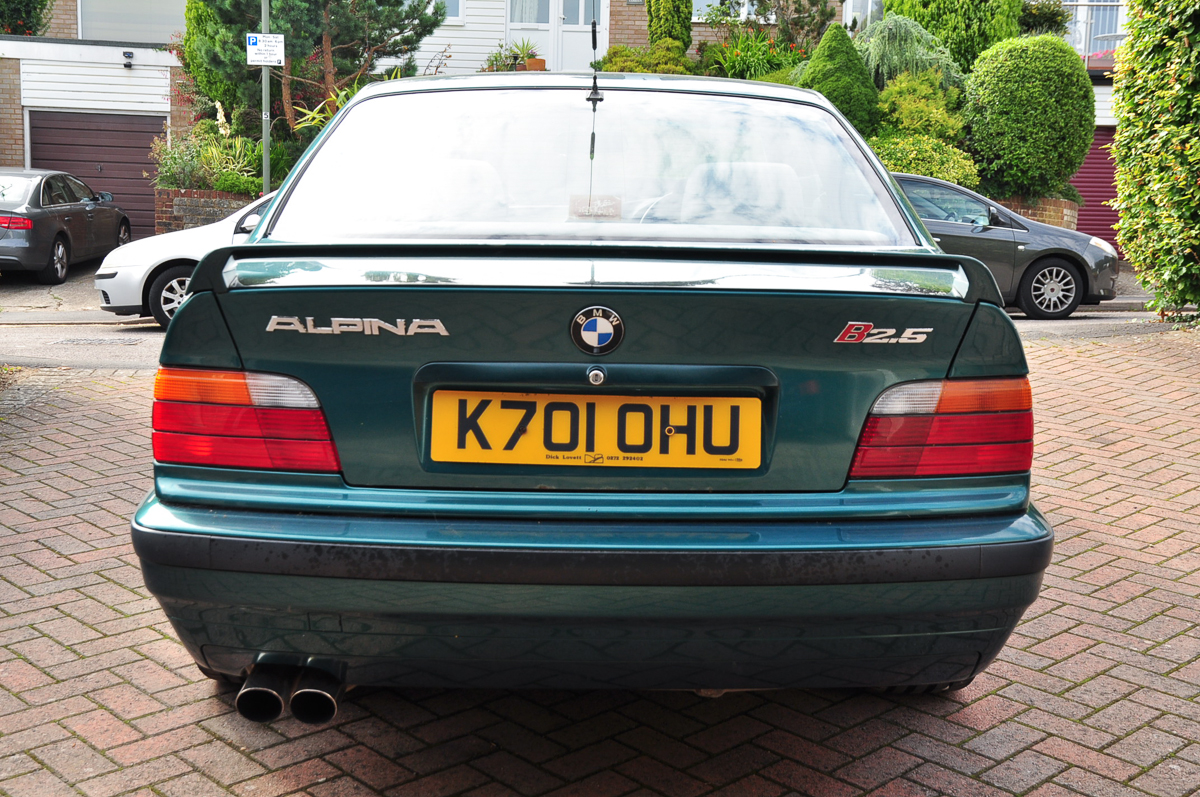 How much is a new badge if I break it in the process I wonder??
Currently:
1992 Alpina B2.5 #026, Lagoon Green with Parchment Cloth

Positioning them on a line with the bottom of the roundel sounds good. Not that I've actually done it yet, but the technique for removal is usually something along the lines of: warm the badge/adhesive as much as possible and use something like fishing wire to cut through, then clean with your preferred thinners or such.
B3 3.2 TOURING #062
Top
Post Reply
30 posts