Thinking of Buying one - ask your questions here.
Buying guides, Specific questions about a car, or about a particular model, ALPINA characteristics.

Hello, I am new to the forum and seriously considering getting an E90 b3. I have had a good look but couldn't spot one - is there a buying guide for these on the forum or elsewhere? Things to look out for, common issues, desirable options etc. Andy
Top

Welcome to the forum! There isn't a buying guide as such for the E9x B3 or B3S that I've seen, but the usual N54 issues are the main concerns as far as I've heard. A quick Google will pull them up. Also worth noting that although the B3S is based on the LCI it still uses the N54 as the base engine not the N55 that BMW introduced for the 335i.

Thanks for replying. Yes, it's the moonstone silver one I am seriously looking at. If you have any thoughts on the car please let me know, any opinions would be really appreciated. I have not owned an Alpina before but have had an e36 M3 (which I did quite a bit of work on myself) and an e38. I had started looking for something 'a bit different' a few weeks ago and have considered Jag xfs, Mercedes C63, Lexus ISF and E90 M3. Apart from the Lexus all of these have potential for big bills. I want a weekend car, practical enough for 4 in reasonable comfort for the occasional longer trip but small enough for the B roads in North Yorkshire. Exciting, powerful but relatively reliable and something that stands out from the crowd. I loved driving the M3 but as a passenger it was too raw. I have had a few older 'modern classics' from the 90s and rust was always an issue which spoiled the ownership experience for me a bit.

I have been aware of the Alpina brand for years but hardly ever see them and hadn't considered owning one. Then this example popped up and I was intrigued. I know insurance is a bit awkward but hopefully not a show stopper.

How many consumable parts are Alpina specific on these? I presume these bits are more expensive and harder to find.

Great to find this forum.

There are links to all the ALPINA parts catalogues in this thread: viewtopic.php?f=38&t=24985

These detail all the parts that ALPINA change from the donor car and anything with a 7-digit part number are unique ALPINA parts, the 11-digit ones are BMW parts just not from the donor vehicle.

Price wise it’s in the right ball park compared to the other two that have been for sale recently-ish, the main thing I would be checking is whether any of the usual N54 big ticket items have been changed as it’s in the mileage range for things like turbos, HPFP, injectors, suspension, etc
B3 3.2 TOURING #062
Top

Not to scare you off too much, but maybe worth reading Faisal‘s post about his B3.
viewtopic.php?t=23917

Thanks for all the replies. I believe the turbos and HPFP have been replaced about 20k miles ago. The broken timing chain is a bit scary - that was what put me off the 5.0 litre SC Jaguar XFS as it is a known issue there.
I thought this would have the N55 engine so have learned something there. I can't see much about broken timing chains being a common issue on the N54 engine.
Top

Probably a case that Faisal was unlucky but when you’re talking about such a small sample size for ALPINA B3’s with an N54 engine any occurrence results in a disproportionately higher probability of it happening to another.

Amazing how rare these are, especially with the K3/1 engine none of which look like they will come to market any time soon
Top

CaesarBob wrote: ↑
Sun May 02, 2021 7:33 pm
Probably a case that Faisal was unlucky but when you’re talking about such a small sample size for ALPINA B3’s with an N54 engine any occurrence results in a disproportionately higher probability of it happening to another.

ALPINA stuck with the N54 throughout its evolution of E9x B3 models.
https://www.alpina-archive.com/?page_id ... mt=%5BK%5D

Youtube channels i have i found the most helpful with maintance are:

https://www.youtube.com/channel/UCpryGO ... grvhrkFbiw < BMW Fanatic ( He owns and maintains his own N54 335)

https://www.youtube.com/channel/UC3iDNe ... nVz7MaN_kg < Vehicular DIY (He owns and maintains his heavily modified N54 335i) He has done all sorts including a full rebuild, rod bearings, anything that needs doing on your N54 it's highly likely that he has covered it and it makews the whole experience a lot less daunting.


Yeah think i was just unlucky i guess if you are going to be buying this car definately have some money set aside for the following jobs (all of which have been done on mine) prevantative maintance is better on these and not all need to be done the day you buy it but as preventative and over time for sure.


What you should budget for as with any N54 based car:

Carbon build up because it's a direct injection engine, so you need to consider getting the valves cleaned (Walnut Blasting is the most common method).

Injectors (Approx around £800/£900 give or take) (Index 12 is what you want) eventually the others go bad and leak etc it took bmw 12 revisions to get this right... Eventually they gave up on the N54 and made the N55 engine haha.

Vanos Solenoids (Approx £150 parts give or take) only buy Dealer/OEM Parts for this.

Water Pump + Thermostat (Approx £300 for parts or so) (Its electric and fails around 100k or so leaving you stranded i decided to just do mine while i did my rebuild prices can vary). May as well do the thermostat at the same time.

Turbos Approx £1.2k for parts if you buy OEM from Mistubishi (will need doing at some point prone to wastegate rattle common issue) - You mentioned this was already done so thats great.

Valve cover gasket leaks - Can't recall the price. Apparently the Cover itself is plastic and prone to cracking etc. (BMw use a lot of S**T Plastic).

Serpentine Belt can shred and be ingested into the engine get this changed as preventative maintance.

Damper Pulley - Did read somewhere that these are prone to failing and that bmw introduces a new design/part number can't remember if mine was the newer one when i bought it i think it was do some research.

Suspension/Bushes - Goes without saying on any old BMW but yeah i have had the rear overhauled completely and plan to do the front at some point this year. I replaced all the arms with bushes and shock absorbers.

Alternator Voltage Regulator - (Bought mine Bosch Part before Brexit paid approx £30.) Need to change this out they fail.

Rear Differential Leaks - Fairly common needs new seals. Had mine refurbished and replaced along with new diff fluid. £200 or so from a diff specialist Including Labour.

Cam Shaft Ledges - I can't remember the price but they were not cheap. Approx £600 give or take.
Whats involved: https://www.youtube.com/watch?v=fME7_EcsEd8

The N54 around 2008 had a common issue with Cam Shaft bearing ledge wear and scoring mine had this and resulted in Vanos Codes so had to replace the ledges thats why i had to buy the special tool from BMW to do it properly.

The cause i believe is the Seal that BMW used some sort of metal Seal that was to agressive resulting in this. As part of the remediation work i also replaced my seal with new BMW Teflon seals. This is a fairly common N54 issue if you google it you will see.

These are the main big ones. There are probably a few other things i have forgotten. Please don't let this put you off but just don't go into blind and put some money aside for some of this work. All performance cars have a similar list of common faults/maintance and issues.
The E9X M3s are no different there is a long list for those also and equally expensive if not more so. Just don't go into this thinking it will be cheap or reliable as far as i am concerned the N54 is neither of those but it does offer an incredible driving experience not to mention potential. There are guys on some of these N54 forums where they are running 600/700 BHP and the engine/platform is described as a modern 2JZ. It just goes to show what an incredible engine it is!
Last edited by B3FNA on Thu May 06, 2021 3:10 pm, edited 3 times in total.
2008 E90 Alpina B3 Bi-Turbo (Current)
Previous:
2004 911 997 Carerra 2 Coupe
2009 BMW 740D M-Sport
2007 Mercedes S320 CDI
2005 BMW 730D Sport
2003 BMW 320D Sport
2000 BMW 316i SE
Top

Thanks so much for going to the effort of posting this, it is really helpful and I am sure will help others in the future.
I assume these costs are for parts and DIY rather than using parts and labour?
Top

themule wrote: ↑
Thu May 06, 2021 9:20 am
Thanks so much for going to the effort of posting this, it is really helpful and I am sure will help others in the future.
I assume these costs are for parts and DIY rather than using parts and labour?

No worries wanted to be helpful as i could and also please again don't let all this put you off the car.

It's just more about going in with eyes open to potential maintenance it may need.

The prices i have given are approximates for for parts but these can vary, labour is on top or you can DIY.

Parts can be found cheaper by negotiating discounts with dealers, as well as buying directly from Germany from the actual manufacturers of the components, Some parts are best from dealer others are fine elsewhere like the turbos.. BMW don't make turbos..

Some things you can DIY and other things best with a specialist or trusted mechanic. There is enough content about the N54 Platform that you could DIY a lot yourself if your competent and have the tools etc.


The N54 Platform has an absolute huge and epic following online with millions of threads covering practically every issue you will ever encounter. This was BMWs entry back into turbo charged cars the technology was developed further and improved and used in a lot of their newer /M Cars! I always wonder if BMW didn't make the N54 if Alpina would have used a Super Charged V8 in the B3 instead but i guess that is something we may never know...
2008 E90 Alpina B3 Bi-Turbo (Current)
Previous:
2004 911 997 Carerra 2 Coupe
2009 BMW 740D M-Sport
2007 Mercedes S320 CDI
2005 BMW 730D Sport
2003 BMW 320D Sport
2000 BMW 316i SE
Top 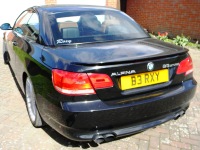 They also cover other models ... albeit with a USA flavour - or should that be flavor ?